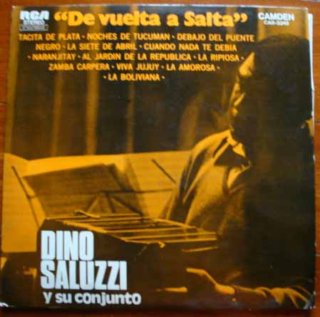 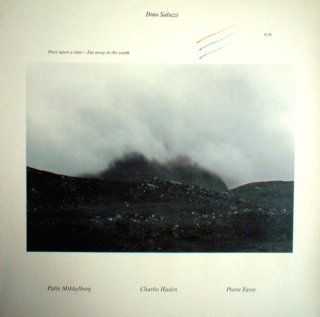 Jazz | Time 55:29 | MP3 320k | Size 121 Mb
Released 1986 | Label ECM 1309 | Covers LQ
Sultry, cool,and moody. One of the best combos of instruments I have ever heard. This hard to find CD
needs to be re-issued and available to listening audiences right away.I've had this on an old cassette for
years. I can't get tired of it. Luckily, I just scored the last issue CD. Like the late, great Piazzola the sound of
mood tango has enormous subtleties and power. Saluzzi takes this music medium one step further, weaving
dreamscapes of bandoneon, with phrases of bass and trumphet and light percussion that tell some strange
stories. Grab a copy somewhere, folks! By Carlo D'Anna "Mortimersnerd"

1. José, Valeria And Matias
2. And The Father Said ... (Intermediate)
3. The Revelation (Ritual)
4. Silence
5. ... And He Loved His Brother, Till The End
6. Far Away In The South ...
7. We Are The Children
Dino Saluzzi: bandoneon
Palle Mikkelborg: trumpet, fluegelhorn
Charlie Haden: bass
Pierre Favre: percussion 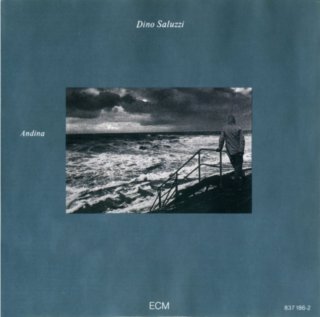 Flac (tracks) CUE, LOG | 179MB Rar | Artwork
Year: 1988 | Total time: 43:15 | Label: ECM | Catalog Number: 1375 | Genre: Jazz
Album review.
Mesmer would be proud. This album presents Saluzzi's bandoneon without accompaniment, unlike most of
his recent work performed in a large or small group. The pieces are all cut of the same cloth and show a
surprising sensitivity and what might be called 'songfullness'. Definitely worth having for those times when
listening is on your agenda, and you can give your full attention. Best in the dark, on a quiet evening.
-- user review @ amazon.com

Composer, arranger, and world-class bandoneon player Dino Saluzzi was born in 1935 in Campo Santo,
Argentina, the son of multi-instrumentalist and composer Cayetano Saluzzi, and spent his childhood in
Buenos Aires, where he was a member of the Orquestra Estable at Radio el Mundo. By the age of 14 he was
already leading his own bands (his first was Trio Carnival) and by the 1980s he had developed his unique
bop-inflected and decidedly postmodern approach to the tango, an approach that has him artfully straddling
the musical past, present, and future with casual yet acute balance. For all his association with the
international avant-garde, Saluzzi still maintains his allegiance to the regional folk traditions of his youth,
and that connection gives his sometimes fragmented compositions an uncommon center of gravity. Saluzzi's
lengthy discography includes the albums Kultrum, Once Upon a Time -- Far Away in the South (both from
1985), Volver (1986), Andina (1988), Argentina (1990), Mojotoro (1991), Rios (1995), Cite de la Musique
(1997), Senderos (2005), Juan Condori (2006), and Ojos Negros (2007), most of which were released on the
ECM imprint.
-- allmusic.com 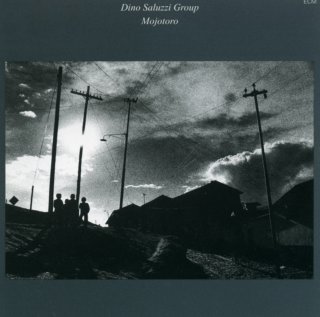 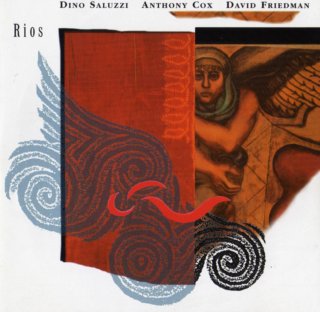 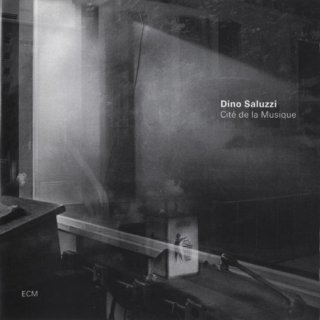 Argentinean Dino Saluzzi manages to be a great bandeonist and sound different
from great Astor Piazzolla. His music is much closer to new age than to "nuevo
tango" invented by Piazzolla and Co, his approach is more "down-to-earth" and
"minimalistic" yet still bears an influence on Argentinean music . That's what
makes him interesting for me and I love this album in particular because of
"chamber sound" if you know what I mean. Like you seat in a big dark room next to
a fireplace and the guys are playing for you. Five stars. - by M. Grigoryan, Amazon.com
It seems pointless writing a review for this album. It's almost as if you will either
come across it in the journey of your life or you will not. If the timing isn't right it
will just waft past you like the scent of a beautiful flower that you pass walking
along a darkened path that you can never find again. I was lucky enough to come
across this album in late 1999 and I have a funny feeling that it will remain on my
top-five-most-beautiful-albums list for a long time to come. It's not as if there's a
particular person or event in my life that this album reminds me of, it's a sort of a
collage of everything beautiful and tragic that has ever happened in my 42 years of
living. It's a medium to a whole collection of memory-feelings all bundled up
together. More than once I have dozed off (stone cold sober) while listening to this
album and have "come to" sensing the most vivid yet indescribable feelings,
particularly during the last two tracks.I agree with the other reviews of this album
- each of which is personal. Unlike other reviewers I can't put any visual images to
the music on this album. I can't even tell my closest friends what I feel some times
when I listen to this album. I just feel it. This beautifully dark and sensual album is
mood altering if you can allow it to get in. - by Sam Calder, Amazon.com 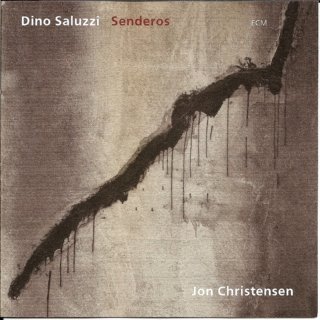 Though Senderos includes just two players, the nicely layered complexities of their individual approaches to
their instruments makes for an incredibly diverse set. Now seventy, Dino Saluzzi is a powerful composer for
his instrument the bandoneon (a part of the accordion family). From hymn-like reveries to cabaret songs to
folk-based melodies, Dino’s breadth is impressive. When he lets loose with a few lines of wordless singing in
Allá!... en los montes dormidos" it is as if, so swept up in the emotion, he had nowhere else to go but to let
it out. Drummer Christensen can be a very quiet presence (he does in fact sit out a few numbers), but that
has been a hallmark of his playing as the resiliency of his pulses never waver, even at a whispered volume.
--David Greenberger 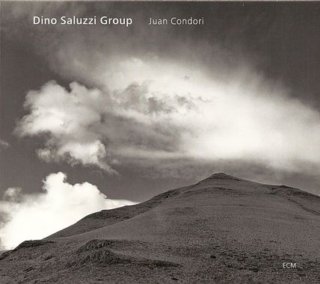 Juan Condori is one of most heartfelt and deeply moving releases you will come across. It is about
remembrance—of childhood, people and place, of things lost and regained, of relationships, of a life lived fully,
with intent.
The group is based around the musical Saluzzi family, plus the outstanding U. T. Gandhi (an "honorary family
member") on drums and percussion. While Dino Saluzzi is the patriarch of the clan, each player provides
memorable moments that emerge from the continually shifting ground that forms the group's "arrangements."
Although there is an obvious structure to the proceedings, it is also quite clear that many cues are passed and a
particular player might take off at any time while the others follow. The music breathes as it moves and its
dynamics rise and fall. There is no shouting, but a feeling of calm effortlessness that masks a certain intensity
and seriousness.
Juan Condori would be a gem in any genre on any label, but for ECM it signifies not just Manfred Eicher's
catholic and superb taste, but also a triumph of emotional immediacy. Sit back and be swept away by this superb
record.
(From AllAboutJazz.com) 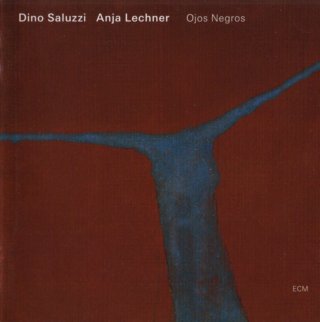 Jazz | Time 58:13 | MP3 320k | Size 141 Mb
Released 2007 | Label ECM 1991 | Scan inc.
The long-awaited album by the Argentinean bandoneon giant Saluzzi and German cellist Lechner, known
both for her work with the Rosamunde Quartet and her explorations outside it. It was, for instance,
Lechner’s interest in Tango Nuevo that made the ongoing Saluzzi/Rosamunde “Kultrum” collaboration
“ possible in the mid-90s; Anja and Dino have toured widely as a duo, too. Jazz Review editor Richard Cook ”
described one of their concerts as being “as close to perfection as any music-making I can recently recall".
Essentially chamber music with inspirational roots in Argentinean traditions “Ojos Negros” puts the
emphasis on Saluzzi’s finely-crafted compositions but also has a strong improvised component. 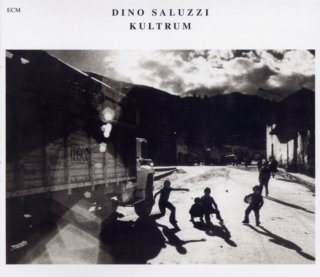 Saluzzi's ECM discography was launched with the solo album Kultrum, spontaneously created in the studio
and an enduring example of the bandoneonist's art as "storyteller." Dino described the music as "an
“ imaginary return" to the little towns and villages of his childhood. The vividness of his musical sketches was ”
not lost on reviewers: "Reworking elements of tango, South American Indian music, backwater folk tunes,
and other root sounds, his breadth of feeling makes for remarkable listening" - Down Beat. 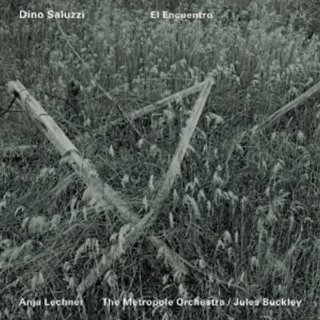 Dino Saluzzi’s new music for orchestra and soloists characteristically glides through the borders between the
idioms. A Saluzzi composition can, from one minute to the next, be “serious”, “popular”, “traditional”,
“experimental -, even if these style divisions barely exist for a bandoneonist who prefers to see his work as
“simply an expression of innocence”. “El Encuentro” was recorded live in Amsterdam with the Metropole
Orchestra in February 2009 and is issued in time for Dino’s 75th birthday in May.